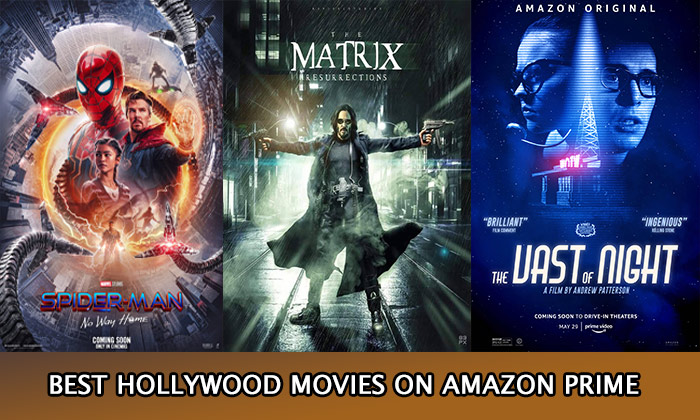 The best Hollywood movies on Amazon Prime are as follows:

Our friendly neighborhood is back! Who doesn’t like a superhero who fights evil and sells pizza? We all are crazy for spidey! Now let’s talk about the movie. Spider-Man’s identity has been revealed now, and Peter is asking for the help of Doctor Strange. After a spell goes wrong, monstrous villains from other worlds start to appear. Starring Tom Holland, Zendaya, and Benedict Cumberbatch, this movie is one of the best Hollywood movies on Amazon Prime right now.

You must have heard about this one. This sci-fi action thriller shows the life of a computer programmer who is also a hacker, Neo. He finds himself targeted by the police after being contacted by Morpheus.

Do you know the rules of the fight club? Yeah, you don’t talk about it! The story of Fight club involves a narrator who attends support groups to get some help in relieving his insomnia. After meeting Marla in the support group, his life becomes more bearable. However, after associating himself with Tyler Durden, he gets involved in the underground fight club and soap making scheme.

Are you looking for a classic sci-fi horror movie? If yes, then you should watch this movie. After getting a distress call from an alien vessel, the crew of Nostromo is awakened from their cryo-sleep capsules to investigate. All hell broke loose when the crew came across a nest of eggs inside the alien ship.

After finishing college, Benjamin Braddock gets back at his parents’ house. He gets involved in a seductive affair with Mrs. Robinson, the wife of his father’s business partner. Benjamin falls for Mrs. Robinson’s daughter, even after getting warned by her to stay away from her daughter.

H.I. McDonnough, an ex-con, marries a policewoman but is unable to conceive a child. After discovering that H.I. cannot have children, the pair decides to snatch a baby. They want to keep their crime secret, but their friends, co-workers, and bounty hunter look to use the child for their own purposes.

This movie is based on a Harvard student Mark Zukerberg who created a social networking site known as Facebook. Later, he was issued by the twins, who claim that he stole their idea.

After his 85th birthday, a renowned crime novelist Harlan Thrombey (Christopher Plummer), is found dead at his estate. Detective Benoit Blanc investigates Harlan’s dysfunctional family and searches through a web of red herrings to uncover the truth behind the death of Harlan.

9. The Vast of Night

This sci-fi thriller is a must-watch if you want a nostalgic feeling. It has some elements of The X-Files, Twilight zone, and many more. One night in Mexico, a switchboard operator and radio DJ discover a strange audio frequency that could change the future forever.

Midsommar is about a couple who travels to Northern Europe so that they can visit a rural hometown’s famous Swedish mid-summer festival. Their ideal retreat turns into an increasingly violent and bizarre competition at the hands of a pagan cult.

These were some of the Best Hollywood Movies on Amazon Prime. You can pick any movie on this list to watch this weekend. Trust us, you won’t regret it.